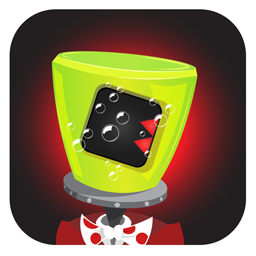 The moment has come for us to introduce you to the five Byters! Five, Fünf!

This is not just the two of us in a dark cave anymore. We are now lucky enough to work with a real team.

Developer / A weird but cuddly man, you should learn more about him...

Developer / A The Witcher / Batman fan, a mind blowing mixture.

Illustrator / An Alien and Fallout 2 fan, he draws gorgeous co....lorful things on sticky notes during his free time.

Discover now the crazy team webpage on our website!

-- The Upper Byte team
Posted by Camille at 3:00 PM No comments:

Email ThisBlogThis!Share to TwitterShare to FacebookShare to Pinterest
Labels: Studio

We've been up and running for 3 years already! We want to thank you all for your support. Thanks to you our world domination plans are looking better than ever. We are proud to celebrate our birthday with you!

So, what's been going on for us these past months? Here is a quick summary of our latest adventures!

Leap Motion release
Wooden Sen'SeY was released on the Airspace last summer. A whole new way to play a platformer, for those thirsty of new and shiny stuff!

Updates!
We have been working hard on Wooden Sen'SeY. We have made lots of bugfixes, optimization and graphics enhancements. On top of that, we overhauled the menus and added a whole new time attack mode with leaderboards and 30 dedicated levels!


Steam release!
Wooden Sen'SeY was released on Steam on last December! For now on PC and Mac, soon on Linux. We partnered with Neko Entertainment to give our game the support and marketing it deserves !

Our first step in the console world! We are very proud of this release: beautiful graphics, time attack mode with online leaderboards, motion controls, Off-TV play, ...

Our team is getting bigger, a new project is unfolding...

We are not just the two of us anymore. Our peaceful life is over! New project, new team, new adventure on the way! Don't worry, we'll get to that later...


We have lots of surprises on our shelves. Keep an eye on social networks, and... Stay tuned!

-- The Upper Byte team
Posted by Camille at 5:42 PM No comments:

Wooden Sen'SeY gets a release date on Wii U!

Finally, Wooden Sen'SeY will be available on Wii U on July 24th! We've been working hard the last months to make this happen, and are very proud of this release.


Wooden Sen'SeY will be available for $9.99.
See you on the Nintendo eShop!

-- The Upper Byte Team
Posted by Camille at 9:39 AM No comments:

About us
All about
Wooden Sen'SeY